ITOA Member Abbey Tours receives gold standard accolade at Deloitte Best Managed Companies Awards !  The company was named as one of Ireland’s ‘Best Managed’ companies for the fourth year in a row recently.  The company was recognised at a gala awards dinner in the Burlington Hotel in Dublin on 1 March 2013.

The Deloitte Best Managed Companies Awards Programme, in association with Irish Life Corporate Business, recognises indigenous Irish companies across the island of Ireland which are operating at the highest levels of business performance. Companies that have been recognised as a Best Managed Companyfor four years running are awarded with a special ‘gold standard’ accolade. In total 14 companies were designated with the gold standard this year.

Commenting on the award, Brian McColgan, Chairman, Abbey Tours said: ”We are delighted and proud to receive this recognition. The Deloitte Best Managed Company award is a significant recognition of Abbey Tours achievements in continuing to grow our business in a difficult trading environment. 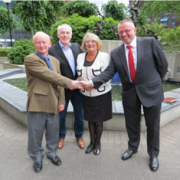